Tonight I had to say good-bye to a close friend of nearly 15 years. A month or so ago I noticed Mischief was sleeping more than usual and he seemed to be a little depressed. He hadn’t been eating well for the past few months. I thought Mayhem was stealing his food, but separating the two didn’t seem to help. After I returned from my week away, I immediately knew something was wrong: he was dreadfully thin and he was so tired he could barely raise his head. He wouldn’t eat and he wasn’t responsive. He just sat and stared in a daze. I took him to the vet. Last time he was there he was over 11 pounds; this time he was 5.6. I don’t think he ate at all the whole time I was gone. Tonight the vet gave me the sad news: his kidneys had shut down and he was anemic, which pretty much means there’s no hope. She thought he had less a week (she was surprised he survived the night, though the fluid treatment she gave him helped). I spent a last few minutes with him. His eyes were alert and was he affectionate, but I noticed he didn’t purr. (He hadn’t purred at all since I returned, even when I rubbed his favorite spot under his chin.) He moved his head actively, but not his body. I think he was too weak to do more.

It’s very sad, but at least he didn’t suffer too much. I knew he was getting old but I hadn’t expected him to go so soon and so suddenly. I was shocked at how emotional I was — I’d mentally been preparing myself for the worst the last few days but it was very hard to let him go. At least I have Mayhem to comfort me (and me him, as I can already tell he’s wondering where Mischief went). Here’s a painting of Mischief I made on my iPad: 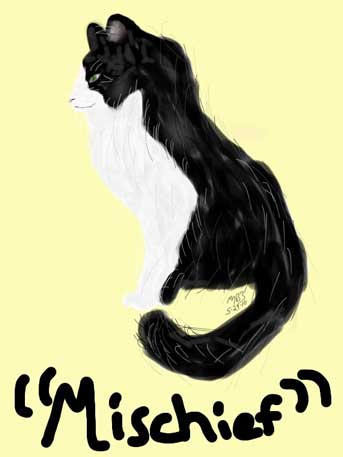 He was a wonderful and loyal friend.

This movie is a fascinating concept: a girl is locked in a mental institution by her cruel stepfather who wants her inheritance and she plots escape within her imagination. The way this works is a cool sort of double-layer dream: she imagines the asylum is a brothel with the corrupt guard the pimp and the female psychiatrist as the madame. She and her fellow girl prisoners are to learn a dance to lure in the male clients and when she dances, she loses herself in an adventure fantasy where she fights warriors and dragons and goes on military missions with her girl friends (I enjoyed the odd mix of tech and eras, from medieval to WWII to science fiction). During the fantasy battle her friends are working in real life to gather the items needed for the escape. When she has all the pieces, they’ll be able to escape for real. The over-the-top “live videogame” visual style (by the director of 300 and Watchmen) is fantastic, but the plot seems too simplistic in the first half and the lack of story means the visuals feel like a shallow gimmick. Later on in the film when reality and fantasy finally collide the film really gets going and from that point on I loved it, especially the terrific conclusion which is thoughtful and surprisingly deep. I understand why it was done this way — as a writer if you know the deeper ending is coming it allows you to be more shallow at the start — but an audience doesn’t know that on first viewing and I found the first half of the film to be tedious and drawn out. I know I’ll enjoy it much more in repeat viewings, but it felt way too long the first time. For instance, the opening sequence is a familiar tale of the stepfather abusing his step-daughters. It’s told without dialog and done with style and panache and a rock-and-roll beat, but the story is so old it’s almost trite and instead of lasting a mere 60 seconds, it feels like it’s an eternal ten minutes. I just wanted it to hurry up and get the girl thrown in the asylum so the real story could begin. But despite this flaw, the rest of the film made up for it, and I have to give this one my recommendation. Though trimming 20-30 minutes off the running time might have made this a great film, it’s definitely worth seeing for the fun videogame visuals alone.