: Dawn of The Planet of the Apes

Quite clever and brilliant, in some ways. It takes up where the last film left off. The idea that mankind was wiped out by the “simian flu” was good, and it sets up a plausible future world where the apes can take over. (The idea that a handful of escaped apes could somehow overthrow six billion people seemed far fetched.)

This film is about how the conflict between humans and apes gets started. I loved the way we’re kept guessing throughout as to how peace or war will be achieved or stopped. There are parts that are predictable or too action-heavy, but overall this keeps moving and is mesmerizing. The ape acting and filming is superb — quite amazing. Definitely a worthy sequel. Can’t wait to see what comes next.

For the past few summers, my aunt has organized “Grandkids Camp” at her sister’s farm near Salem, Oregon. The property is huge and old, so there’s room to camp out and the kids have lots of adventures. As the camp has grown (there are only three kids, but it’s the highlight of their year, so it’s gotten longer and more involved), my aunt’s gotten other family members to contribute in their areas of expertise.

Last year my cousin (who’s a movie director) and I created a short film with the kids. This year Joel couldn’t make it but suggested he contribute some video footage remotely. He suggested something along the lines of a National Treasure type hunt, with video clues.

Working with that concept, I came up with a storyline and organized an elaborate treasure hunt. Since the kids do a treasure hunt every camp, we had a fake hunt organized to fool them into thinking they’d already found their treasure (the fake hunt’s prize were chocolate “gold” coins). This helped them believe that the hunt I created was the real thing because they’d already done the hunt!

Since my goal was to make this believable, I had to come up with a plausible story as to why gold would be buried on the farm. I created a fake pirate who wasn’t from the Caribbean, but a river pirate on the Mississippi. I had him escaping to the Northwest with his gold where he died under mysterious circumstances. I had his body being found by an oddly-naked soldier, James Knickerbottom.

My aunt’s sister and her husband planted seeds early after the kids’ arrival that “Knickerbottom,” the guy they’d bought the farm from, kept calling wanting to dig more holes on the property looking for treasure. This was a key clue in making the treasure hunt believable. I purposely picked a funny name that the kids would remember and it worked to perfection!

Next, we had the kids start looking for clues. They weren’t too enthusiastic at first, thinking that the treasure hunt had been done and this wasn’t an official activity, but I pretended to be curious about this “real” treasure. The first clue we found was in the old barn: river pirate Mississippi Joe’s wanted poster: 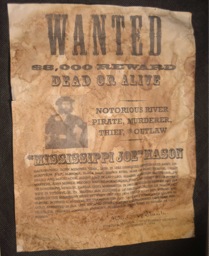 Once we found that, I pretended to search for more information about this guy on the internet and discovered a website about Mississippi Joe. (This is a fake site I created just for this game!)

On the site was a short documentary video about Joe, which my cousin had created from my script:

It’s really awesome and makes the pirate seem like a genuine historical figure. It worked unbelievably well, particularly when the kids noticed a shot in the video of the same wanted poster they had in their hands! They were absolutely convinced that the ancient and damaged document in their hands was a priceless historical artifact.

I’d also created some fake newspaper clippings which were used in the video. These were included on the website and gave the kids something to read and explore: 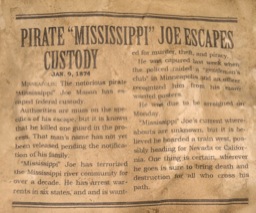 To create these, I wrote the text, designed them as old-fashioned newspaper articles, and printed out low-resolution copies. Then soaked them in tea and baked them in an oven at 200 degrees. They really look old!

Next, the kids investigated the old milk house where they found James Knickerbottom’s diary. Supposedly Jame’s son Eli had found it in 1902 but his mom had burned it, worried her son would become as obsessed with hunting for the gold as her demented husband. I actually created an entire 48-page diary, printed it out, and sewed it into a little booklet (I had to learn how to operate my sewing machine). I then aged and burned it. It came out awesome: 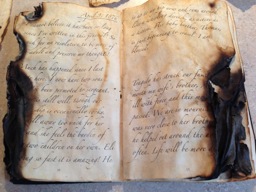 There were lots of clues in the diary to keep the kids interested, but the real secret was the scrap of paper hidden in the pocket at the back of the diary: 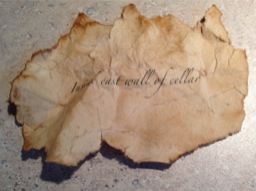 Once the kids noticed and found that, they were on their way! This led them to the actual treasure map, hidden in the cellar of the original old farmhouse: 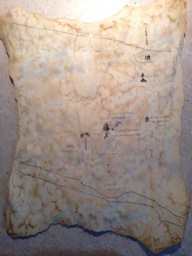 Finding the treasure itself was an adventure, for Mississippi Joe, who’d been dying, didn’t have time to did a big hole. He buried the treasure in a small hole at the base of a large tree. Of course, the kids couldn’t find this tree: that was 100 years ago and the tree had been cut down. All that was left now was a big stump. But the kids dug around the stump and discovered the gold coins hidden inside a moss-covered ceramic vase plugged with a cork. It looked amazingly real and was fully believable… until one of the boys noticed one of the coins had a 1964 date stamped on it!

The kids had a terrific time, though they were slightly disappointed that the whole thing wasn’t really real. They were fooled until the very end, however. I’m sure they’ll remember this experience for the rest of their lives!

It’s been a while since I’ve seen Monsters, Inc., but I always liked it and felt it was underrated. I’d wanted to catch this sequel in the theater but it didn’t work out. It’s definitely not as original, since it’s set in the same world, but it’s still very good. I’m not so sure I’d say “great” but definitely excellent.

The story is a little forced, with our two main characters going to Monsters University and hating each other, but, of course, they eventually work things out, learn deep lessons, and become best friends. There are a ton of school puns and lots of other fun stuff, but the core lesson about not being judged based on what you look like is enduring. Definitely one you want to see.

As Hitchcock fan, I’d been wanting to see this film for a while. I knew it didn’t get the best reviews, but I wasn’t sure why. The cast of Toby Jones and Sienna Miller was top notch and the story of Hitch’s relationship with Tippi Hedren while filming The Birds sounded interesting.

Unfortunately, the film’s a disaster. To be fair, it is an interesting disaster, but it’s a terrible film.

The film postulates that Hitch was a monster. He was portrayed as such an evil snake I had a difficult time watching the movie (it took me several nights). He leers at Tippi, tells sexual jokes to make her uncomfortable, assaults her, tortures her in his movie, and threatens her to try and get her to sleep with him.

Now all that could be true. I don’t know. I wasn’t there. I’ve read books about him and seen his movies, but that doesn’t mean I know the real guy. He might have been a total jerk. But this film doesn’t give us any other picture of Hitch. We don’t even see any of his movie genius — he’s presented as a rich fat guy in a position of power who treats the women around him like crap. I’m sorry, but that’s just too narrow a definition, even if aspects of his behavior were true.

But there’s also a lot false about this portrayal. We know that Hitch had crushes on his leading ladies, and that filming The Birds was hell for Tipi, but I find it impossible to believe that Hitch could be so blatant. He was a subtle man. His sense of humor was so dry that many people wouldn’t get the joke. That’s a man who hides his true feelings and not someone who would crudely paw a woman. (If Hitch were to have an affair, it would be an affair of the mind and soul, not the body.)

I’d add that since Hitch worked with many of his leading women in multiple films, and none have come out and put forth claims that he acted this way, it’s highly unlikely he could have been so blatant. Perhaps he wanted to behave this way, but he didn’t actually do it.

What really disappointed me about this movie is that it had potential to be great. The idea of a genius director obsessed with his star is fascinating. There was room her for real psychological insight into a tortured personality. We could have learned more about Hitch and Tippi — instead we learn nothing about either. Tippi’s a pretty blond who is in over her head in dealing with a powerful figure like Hitch, while he’s just a monster. Alma — Hitch’s wife — is a near-silent figure lurking in the background watching, but there’s so little explanation there we have no idea what their relationship is all about.

So instead of learning why Hitch’s obsessions made his film’s great, all we got is a portrayal of a man who should have been put in jail for his treatment of women. Just disgusting.